Lighthouse of the Heads (Cabezas) in San Juan

Lighthouse of the Heads (Cabezas) in San Juan

The Cape San Juan Light, the second oldest of the island, is located off Cape San Juan to Fajardo. The construction of the lighthouse, which had begun in 1877, had to stop for budget reasons and began again in 1880, following a few seconds flat. The work was completed in 1882.

The structure, neoclassic style, is rectangular and measures 30 x 15.5 x 6.6 meters. The main facade has a portico entrance in the form of a triumphal arch and four arched windows. The structure is surrounded by an elaborate cornice with the inscription 1880, when it first opened. The cylindrical tower is 13.35 meters high to the upper level of the flashlight and has a wrought iron staircase. The original lantern this lighthouse illuminated third order within 18 miles.

The structure was damaged during Hurricane San Ciprian 1932 and in the 1940 and 1950 alterations were made inside the building. In 1975 an automatic lighting system was installed and currently still running.

Today, the lighthouse is part of the Natural Reserve of San Juan Cabezas, which is under the administration of the Conservation Trust of Puerto Rico. Under the leadership of this organization, in 1989 they began the restoration work of the lighthouse, which ended in 1991. Since then the lighthouse is one of the attractions of the reserve. 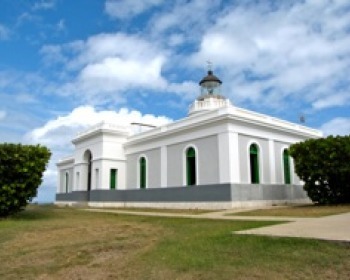